This is a small Act 7 side quest, offered by Anorak in the Conclave of the Three after completing the Loyalty to the Three quest.

Anorak became separated from his two brothers while looting around the Cairan Docks. They went into an old temple and have not been seen since. He asks you to look for them.

Anorak's brother Aaral can be found, injured, in the Cairan Docks, outside the entrance to the Sandblown Ruins. and says his brother Anderan is still inside. After sending Aaral through a rift, enter the Sandblown Ruins. At the far end of the first level is a Rotting Corpse and some Dynamite. The Corpse belongs to Anderan, and clicking on the corpse will summon his ghost. Anderan explains he was killed by a spell from a crazed priest, and is now trapped in the ruins until the priest is dealt with. Tirgan, the Mad Priest is found at the end of the second level. After slaying him return to Anorak, who is now reunited with his brothers. 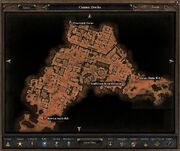