The Word of Rahn

This is an Act 7 side quest, offered by Raiken after completing The Heart of Onarix and reaching Honored Faction Status with the Cult of Solael.

Raiken has learned of some forgotten fragments of secret knowledge, still hidden in the Korvan City, and offers to share it. He tells of three silver statues that can be activated and the fragments recovered and deciphered.

The three Mysterious Statues can be found in the Remnants of Korvan City (see map below). Each statue requires a randomized riddle or question to be answered correctly in order to be activated.

On activation, each statue will drop a Word of Rahn quest item. Return to Raiken with all three to complete the quest and claim the reward. 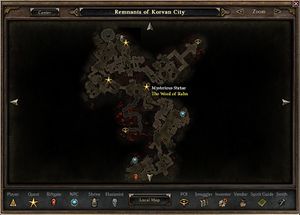 In addition to the Rune Augments Blueprints, completing the quest will unlock the Map Room of Rahn secret area, which has a hidden entrance located in the middle of the triangle formed by the three statues.