Leave, puny thing. I speak only to Kymon. - The Messenger 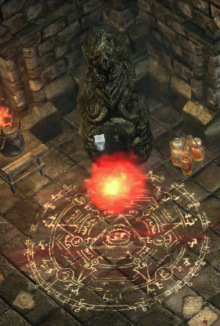 The Messenger is an NPC located within Kymon's study. After completing the quest Kymon's Secret, the study is unlocked and the truth is revealed about Kymon's Chosen. While the Messenger offers different dialogue options, none of them actually start a quest or affect the player's reputation with Kymon's Chosen.