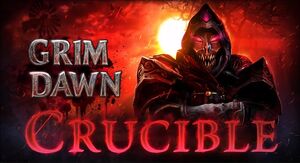 The Crucible is a DLC that introduces a challenging new arena gameplay mode to Grim Dawn.

The Crucible was conceived as a stretch goal during Crate's successful Kickstarter campaign. Originally called Survival Mode, it was described as follows: “In survival mode players will fight to stay alive against increasingly difficult waves of monsters.” The DLC was made available for free to those who purchased the game prior to or during the Kickstarter campaign.

The Crucible features six battlegrounds, each with different layouts and defensive positions. The player can select their preferred map or opt for it to be randomized.

In the Crucible, death marks the end (particularly for Hardcore players). Every 10 waves of enemies, the player has the choice of continuing on for the next 10 encounters for a chance of greater reward, or cash out what they’ve earned and not risk their own demise.

Should the player die, they cannot continue further in the Crucible. However, in (softcore) Multiplayer, it is possible to revive if another party member finishes the wave.

The quality of the treasure contained within the Treasure Chamber, the experience earned and the Tributes earned depend on the difficulty of the Crucible, how many waves are defeated and whether the player died or chose to cash out, with an additional treasure chest earned for successfully completing the Crucible.

Tributes are the currency of the Crucible, granted after every 10 waves. Tributes can be spent to restart the Crucible at various checkpoints (wave 50 or 100), or to increase the odds of survival with the aid of Celestial Blessings and arcane Defenses.

Tribute points can be spent to create defenses around the arenas, giving the player an advantage against the increasingly difficult waves of enemies. All defenses can be upgraded twice; the first adds a new ability, the second empowers their abilities.

Tributes can also be spent to purchase Celestial Blessings from the NPC Torralia, the Immortal Archmage.

Each Blessing costs 12 Tributes and provides a buff to players for a duration of 25 minutes.

As the player progresses through the Crucible, various Mutators will be introduced into the gameplay. Mutators are global effects applied to all monsters or players, each one strengthening monsters/players in one way, but weakening them in another.

The Crucible begins without any Mutators, and the first one is introduced at Wave 31. Every 10 waves, the Mutators are randomized.

The number of active Mutators increases in later waves, up to a maximum of five.

The Crucible scores each game to let players measure their performance and compare it with that of other players. Each time an enemy is killed, the score is increased based on the type of the monster, the current wave, and the game difficulty. Beating the bonus timer applies an extra multiplier to the score.

Score is only saved if the player claims the reward or dies.

At the start of each wave, a bonus timer is reset and starts counting down to 0. If all enemies are slain before the timer expires, the score multiplier will increase by 1 to the maximum of 10. This in turn magnifies all the points earned for each subsequent enemy slain. However, each time the multiplier is increased, the bonus timer for the next round is reduced. At the end of the Crucible, an extra chest is awarded based on the player's final score, so maintaining a high multiplier helps receive better loot.

Defeating a Hero, Boss or Nemesis monster will add several seconds to the current bonus timer.