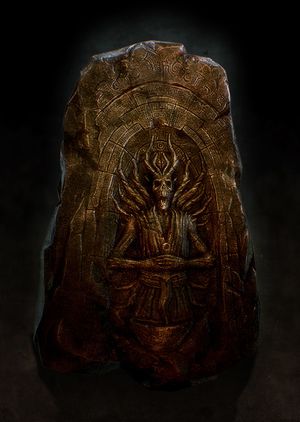 Solael, the youngest of the three Witch Gods. Eldritch fire is at his behest, the very essence of the eldritch realm his to mold and shape as he sees fit. Clothed in black robes that hide his gaunt frame, Solael glides unseen through the shadowy veil to hunt unwitting mortals for their vitality. Many a devout of Solael had been asked to make the ultimate sacrifice, to present themselves before the dark god and offer their life so that Solael may bestow his infinite wisdom upon those that remain.

Solael and Bysmiel were lovers in their mortal day, intertwined in their fates; but their hunger for power was greater than their lust. Unwilling to allow the other to rise above them, they would sabotage each other's efforts, all the while maintaining the facade of a loving relationship.

Ultimately, both achieved their goals, but the schemes forever soured their relationship and sparked conflicts that ravaged the world. It was not until the Covenant that the gods set aside their differences, but tensions remain high to this day between the followers of Bysmiel and Solael. - The Attendant

The dark one's very presence inspires dread. He saps those around him of joy, of emotion, of the will to live. Of the Three, Solael is the only one who regularly demands living sacrifices in exchange for his wisdom.

Why he hungers so for the vitality of the living, I do not know, for none are privy to the personal matters of the gods. Perhaps he misses what it felt like to be mortal? To live knowing that you could be extinguished at any moment? Despite that, many risk it all to stand in his presence and bask in the knowledge of the eldritch. - The Attendant