Riggs is an unusual kind of merchant from the Forgotten Gods expansion who lives in the Conclave of the Three. Riggs offers the player some rare, powerful, and expensive items without charging anything, but treating the deal as a debt to be repaid later.

After completing the quest Loyalty to the Three, Riggs offers the player the short quest Now You Owe Me, where he gives them a Rare-quality item with a warning that the player is now in debt that they will need to repay later when Riggs demands. Afterwards, should the player reach level 50 and complete the quest The Forgotten God (ending the expansion's main questline), Riggs will give a similar quest, Deeper in Debt. This time, Riggs gives the player an Epic-quality (or, on Elite and Ultimate difficulties, a Legendary-quality) item.

After giving the second item, Riggs informs the player it's time to pay the debt, and not in iron bits or any other usual means. Riggs needs the player to delve into a challenge dungeon and retrieve an artifact known as the Iris of Eternal Night. This starts the quest Paying Debts, which the player may decline, in which case Riggs makes a death threat, and his hostile associates start appearing throughout Act 7 areas until the quest is accepted. 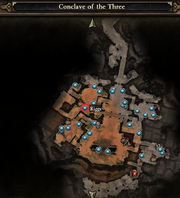 Riggs' location in the Conclave of the Three
Retrieved from "https://grimdawn.gamepedia.com/Riggs?oldid=107387"
Category: