Rhowari Legacy is an Act 2 side quest, offered by Amkala after gaining Honored Faction status with the Rovers.

Amkala tells you of the shrine to Mogdrogen, far away in the Asterkarn Mountains, which is sacred to the Rovers. The shrine has been destroyed by the Cult of Ch'thon and its pieces scattered. Amkala asks you to recover the pieces and restore the shrine. 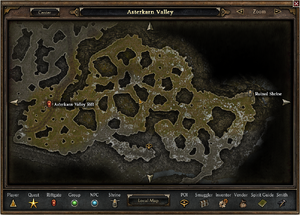 The Ancient Heart can be farmed for from Beasts or retrieved from the player stash.

Take the three items to the ruined shrine of Mogdrogen, located on the eastern edge of the Asterkarn Valley. Placing the items in the shrine will  release three waves of chthonic creatures. When these are defeated the avatar of Mogdrogen will appear. Speak to him and he will grant the reward for completing the quest.