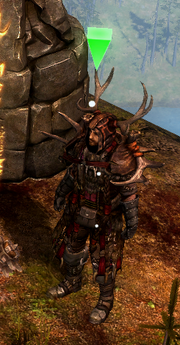 I am the Lord of Beasts, protector of nature, and guardian of the Rhowari. Your mortal kind calls me Mogdrogen.

See Avatar of Mogdrogen (Boss). For the Constellation, see Mogdrogen the Wolf

A shapeshifter, a God of Beasts, he is the protector of nature, worshipped by the travelling people 'The Rovers'. You first encounter him in the Asterkarn Valley after you've completed the Rhowari Legacy quest.