Malkadarr, Champion of Death's Vigil was a member of the Order of Death's Vigil who lost his life in an ambush by Kymon's Chosen. Depending on which faction the player chooses to join during Allies Among the Ashes, Malkadarr will show up later on as either an ally or a foe.

If the player sided with the Order of Death's Vigil, the player will be tasked with helping the Order perform the Rite of Resurrection to bring Malkadarr back to life as an undead revenant. After finishing the ritual during Service Beyond Death, Malkadarr will appear as an NPC in the Chamber of Souls area of the Bastion of the Order, where the ritual took place.

If the player sided with Kymon's Chosen, Malkadarr, Champion of Death's Vigil will appear as a unique Boss creature in the second level of the Tomb of Archon Barthollem. Killing Malkadarr is necessary to complete The Sacred Ashes faction quest as he drops the Sacred Ashes of Empyrion quest item. 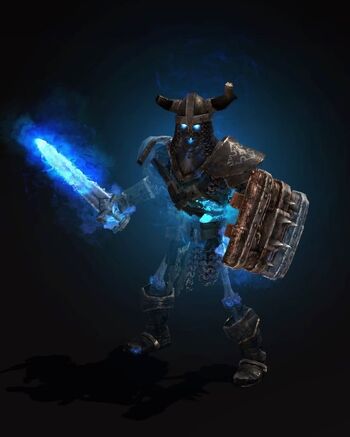