Kasparov is an eccentric but kind scientist and inventor who lives in his workshop, a small house beside the riftgate in Devil's Crossing. He provides four (five with the Ashes of Malmouth expansion) quests:

Kasparov is focused on scientific advancement and somewhat absent-minded with a relation to that. He does not prioritize safety for his experiments, as evidenced by his explosive interactions with volatile materials,[1] and one such interaction was a possible cause for the loss of two of his fingers.

Kasparov has an apprentice, Darlet, who the scientist feels responsible for, but does not really hold in high regard. He calls Darlet inept and tasks her with handling "menial" assignments for the Taken, considering his research too important and complex to allow for interruptions.

A phenomenon not witnessed before, a human (though possessed) using riftgates for travel, was not something a scientist like Kasparov could ignore. While the game's protagonist was unconscious after being spared by Bourbon from death by hanging, Kasparov performed some tests on this person, including taking several blood samples. The results indicated that the Taken's body contained residual Aether energies even after being abandoned by the Aetherial that had possessed it.

After the Taken successfully lifted the siege from the prison, Kasparov tasked them with retrieving Aether crystals for a device intended to replicate their attunement to riftgates without the need to involve possession by an Aetherial. However, after the Taken gives the needed materials to the scientist, the device explodes, generously irradiating the unamused protagonist with an additional dose of Aether.

Following the resolution to Kasparov's riftgate business, the scientist remembers the problem he had with his apprentice Darlet. Darlet went missing after being sent to Burrwitch Estates to gather materials, and Kasparov is somewhat concerned for her safety. The Taken, who would be expected to travel to Burrwitch anyway, seemed like a fitting person to ask to look for the young woman. 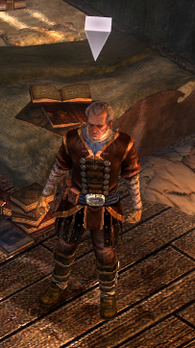