Grim Dawn features a Faction system, which allows the player to take advantage of the reputation (and infamy) gained with the various npc groups of Cairn. A player can aid a faction by slaying their enemies or undertaking quests given out by the various NPCs of that faction. However, a player will only begin earning reputation with a faction from slaying monsters once they have completed an inital quest for that faction. Once a player has earned enough favor with a faction they will begin to unlock unique rewards such as discounts at vendors, access to previously inaccessible quests, and faction-only items.

The Grim Dawn base game has a total of 12 Factions, with 7 friendly and 5 hostile. However, the player must eventually choose between the order of Death's Vigil and Kymon's Chosen, and the rejected group then also becomes an enemy faction.

The Ashes of Malmouth and Forgotten Gods Expansions each add three friendly and one hostile faction, bringing to full amount to 20. 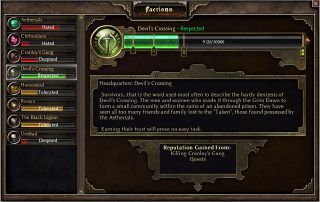 There are 9 tiers of reputation, starting off at the Tolerated tier and progressing thereafter towards either a stronger alliance or deeper hostility. A player's alignment with the various factions is indicated in the Faction window.

Reaching Despised Status will introduce additional champion spawns, sometimes with monsters that do not normally spawn in an area appearing to bolster their forces.

Upon reaching Hated Status, an increased rate of Hero Monster spawns for that faction wherever their forces are found. In the case of Kymon’s Chosen and the Order of Death’s Vigil, this will be the first time their heroes are encountered.

On reaching Nemesis Status, Nemesis spawns can be found. Each hostile faction has a Nemesis that can spawn in that faction's territory. These are rare ultra-tough bosses with powerful abilities, along with larger loot drops and a higher chance of rare Blueprints.

Each friendly faction offers its own specific equipment for purchase, available from the Faction Quartermasters as rewards for gaining reputation.

Factions offer Bounties via their respective Bounty Tables. These are small quests where the player can earn additional rewards and reputation. There are a total of 145 Bounty Missions across the 7 friendly factions.

A writ is a consumable item that boosts your character's reputation gain with its respective faction by 50%. Unlike mandates, writs are soulbound, i.e. they cannot be transferred. Even though you can purchase multiple writs from a single faction's quartermaster, only one writ per faction per character can actually be used.

A mandate is a consumable item that boosts your character's reputation gain with its respective faction by 150%. Mandates can be transferred between different characters. Even though you can purchase multiple mandates from a single faction's quartermaster, only one mandate per faction per character can actually be used.

Nemesis bosses have a chance to drop Warrants, which boost Infamy gained with the respective faction by 50% across all difficulties. Warrants can be freely traded between players.

Across different characters or difficulties, you should achieve maximum reputation with each at least once to acquire their blueprints and nemesis with the opposite at least once.

Each faction has their faction vendor items to consider. TODO describe.

With or Against The Outcast[edit | edit source]

You should aid her with at least one difficulty to get blueprints. Because of the value of her augments, perhaps consider siding against her with only one character that can farm her unique drops.

With: Access to faction vendor, which has unique blueprints and some particularly good augments.

Against: Access to the additional dungeon and killing Anasteria for her unique drops.

With or Against Barrowholm[edit | edit source]

You should aid them with at least one difficulty to get blueprints. Beyond that, it's largely a choice of which you'd prefer between Ravager vs Reaper of the Lost.

Against: Access to the additional dungeon, and an additional nemesis (Reaper of the Lost, who has unique drops).

While you gain reputation with all three factions and eventually can get all of their items, the quests for each faction varies, with equal rewards. Each faction, if you allied with it, also has a set of blueprints for mobility augments specific to it as a secondary quest once you reach honored. Bysmiel is probably the fastest to do: It's possible to get extra Blood of the Watchers to keep for future difficulties if you want to, and its quests are less "out of the way" than the other factions. Its honored quest is also simpler than the other two. You should, across multiple characters, do each faction on each difficulty so you can get all 9 quest-related blueprints.

Particular notes on each:

Dreeg: Primary has a unique area named Edge of Reality (Chtonic) with a boss Ishtal (who does not have a unique drop). Honored: Future is Madness, to kill a boss Inarah (no unique drop). Dreeg's Vector, a teleport and acid movement augment.

Solael: Primary: Has a unique area, Blood Wastes, a Chtonic Void area to where you can fight Onarix (who does not have a unique drop). Honored: Word of Rahn, finding and aligning statues in Korvan City. Kind of an annoying quest. Rahn's Might, a shield-based movement augment.