Duncan is a blacksmith located in the Burrwitch Outskirts. Following a disagreement with him, his master Angrim left their camp to find the Black Legion and become their armorer. Angrim took his forging hammer, the Malleum Menhir, with him, and without it, Duncan can't make equipment of acceptable quality. As such, Duncan gives the quest Tale of Two Blacksmiths, where he asks the protagonist to find Angrim and retrieve the hammer.

Duncan and his master Angrim were camping out in the Burrwitch Outskirts along with some survivors (Darian, Gertrude, and Marcus). The two blacksmiths had a disagreement about using their abilities: while Duncan wishes to help as many survivors of the Grim Dawn as he can, Angrim insists that the two blacksmiths should only help those willing to fight against humanity's enemies. Having heard solid rumors of the Black Legion surviving the chaos that erupted in the empire's capital, Angrim left Duncan's camp to lend his abilities to the Legion,[1] taking the Malleum Menhir, his ancient forging hammer, with him. As a result, should Duncan meet the protagonist, he will ask them to find Angrim and retrieve the hammer.[2]

Both Angrim and Duncan are highly talented blacksmiths, though while Duncan is very capable of weaving magical properties into forged equipment, Angrim prefers to make weapons and armor excelling in raw strength. Yet neither blacksmith can make quality equipment without the Malleum Menhir, which means that the Taken must choose who of them to side with. If Duncan is the one the protagonist chooses, Angrim will part with the hammer voluntarily or be killed for it, depending on the dialogue path taken, and after Duncan gets the hammer, he settles in Devil's Crossing, where he makes his blacksmith services available to the inhabitants of the old prison. Should, however, the player character side with Angrim, Duncan will understand and stay in his camp to keep aiding the survivors located there.[2]

As a blacksmith, Duncan possesses the talent of Arcane Forging. Crafted weapons, armor and accessories are imbued with one of the following properties: 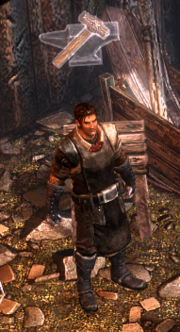