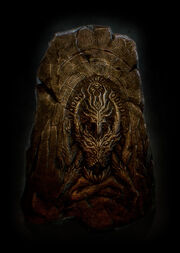 The oldest of the three Witch Gods. As the first mortal daring enough to peer into the secrets of the Eldritch Realm, he was blinded, but returned with a type of sight beyond that of mortal limitations. Dreeg is associated with Acid and Poison damage.

Dreeg, the oldest of the three Witch Gods. The Great Guardian sought to know all, to see the truth behind the veil that blinds us all. In arrogance, or perhaps foresight, he cast aside the ancient warnings and the cautionary words of his peers. Dreeg reached into the veil and witnessed the workings of the gods themselves. For his hubris, he was struck blind, but it was then that his eyes had become truly open. Exposed to the wild magic of the eldritch realm, he was forever changed. Cruel spines pierced his flesh, acidic blood dripping from the festering wounds for all eternity. What emerged from beyond the veil bore little resemblance to the man that entered. Dreeg was reborn...a god.

Dreeg now watches over us all, his peerless gaze pierces through our very souls and sees us for who we really are. To stand before the Great Guardian is an honor without match, to hear His voice is a blessing from the heavens themselves. - The Hidden Path - Dreeg

Only once have I witnessed the true form of Dreeg. He is a creature of nightmares. A thousand lidless eyes stare through you and spines of bone pierce his divine flesh. Acid drips from the festering wounds and singes the earth so that nothing ever grows again.

His voice drives lesser beings to madness. It is said that he speaks prophecy, foretelling events not yet transpired, but to hear him overwhelms the senses. Few have the capacity to withstand him, fewer still can interpret the mad ramblings of those that did.

Whatever Dreeg had done to ascend, I am not certain that it was worth the price he had to pay. - The Attendant