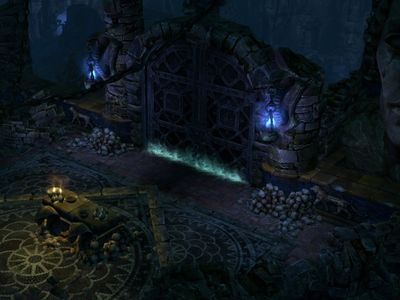 Challenge dungeons are areas in Grim Dawn which contain some of the most difficult content of the game, and are intended to provide the player with a means to test their skills, as well as additional end-game and farming options. Numerous side-areas fall into this category, as well as the special "rogue-like" dungeons.

At the pinnacle of challenge dungeons are "rogue-like" dungeons, named after the early predecessors to the modern action-RPG. The term was derived from the 1980's game Rogue, and rogue-likes are characterized by random layouts and permanent death that made the experience intense and final victory all the more satisfying. Unless playing a hardcore character, death is not permanent in Grim Dawn, but Crate have tried to capture the thrill of rogue-likes in these special challenge dungeons by sealing the door upon entering and disabling riftgates so that there is no way out except by death or reaching the end.

A crafted Skeleton Key is required to unlock the door to a rogue-like dungeon each time the player enters. They are populated by various traps and numerous unique enemy heroes and Bosses. Layout is also partially randomized, so that the player may not be able to take the same way through as the previous time, and treasures may not appear in the same locations.

There are five different Rogue-like dungeons for the player to explore, each with their own theme and monster faction.

The first challenge dungeon, the Steps of Torment, can be accessed in Act 2, with the entrance located in the Broken Hills. Populated by the Undead, this dungeon consists of 5 levels. Level 4 and 5 make up the rogue-like section.

Port Valbury is found in Act 3. It is accessed via an Aetherial Rift which is located beyond the Detonation Site in The Conflagration. This dungeon, unlike the other two, is an above-ground zone over-run with Aetherials.

Found at the end of Act 4, the Bastion of Chaos entrance located in the Necropolis Interior. Populated entirely by Chthonians, the dungeon has four levels, with levels 2 to 4 comprising the rogue-like section.

The Ancient Grove is found in the southeast corner of Ugdenbog in Act 5. Populated by Beasts, A Skeleton Key is required to enter the Feral Thicket and progress to the Tainted Wood.

Tomb of the Heretic[edit | edit source]

Main article: Tomb of the Heretic

The Tomb of the Heretic is accessed via the Lost Oasis in Act 7. It consists of three levels, with a skeleton key required to access the final two. The Paying Debts quest leads the player to the Tomb, but can be accessed without it.