For the Faction, See Chthonians. 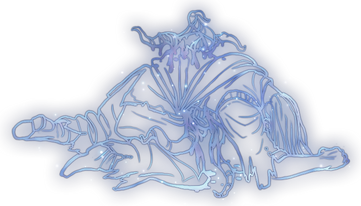 The primordial Ch'thon, also known as the Elder, Dying, or Dead, God. He is the figure of worship to the Bloodsworn.

In an age preceding the creation of the mortal planes, an elder god was betrayed by his children; his body torn apart and drained of blood so that they could use its power to breathe life into their own creations. His remains were cast out of creation into a void but, incapable of death, the god lingered on in the darkness, doomed to an eternity of pain and madness; feeling the suffering and death of all mortal things that were given life from his blood. His name forgotten by time, the dying god is known only as Ch'thon; he who dwells below creation. - Dying God