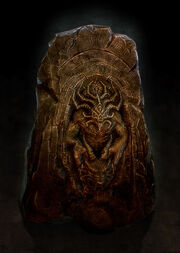 Bysmiel is one of the three Witch Gods, once mortals, who have ascended into godhood by trespassing into and witnessing the Eldritch Realm. Bysmiel is associated with summoning forth Eldritch creatures.

The Weaver, Schemer, Lady of Whispers, these are all names by which the goddess Bysmiel has been known. Though the cataclysmic events of recent history have crippled her web, Bysmiel still commands a formidable network of informants and spies.

None know for certain how she came upon her powers, some jokingly say that she heard it whispered into her ear by a spider. What we do know is that she and Solael were lovers in their mortal day, intertwined in their fates; but their hunger for power was greater than their lust. Unwilling to allow the other to rise above them, they would sabotage each other's efforts, all the while maintaining the facade of a loving relationship.

Ultimately, both achieved their goals, but the schemes forever soured their relationship and sparked conflicts that ravaged the world. It was not until the Covenant that the gods set aside their differences, but tensions remain high to this day between the followers of Bysmiel and Solael. - The Attendant