Matron Malostria has had visions of a horrific Aetherial creation rampaging through the outskirts of Malmouth.

The creature has already killed several new recruits trying to leave the city.

Destroy the beast called Vanoxxis Bile in the Malmouth Outskirts, for the future of the Coven.

The Coven has set aside some of their ritual supplies as compensation for this task. 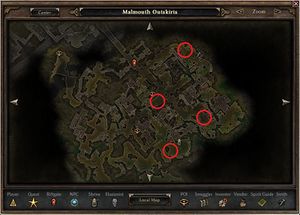 Vanoxxis has four possible spawn points in the Malmouth Outskirts.