A group of five Dreeg scouts were recently attacked by a particularly large gryphon. Three of them were killed in the attack and the remaining two were gravely wounded.

We cannot allow these attacks to continue. The gryphon called Razorfeather was last spotted near the Cairan Docks. It must be eliminated.

The destruction of this abomination shall be rewarded with scavenged materials.

Razorfeather is a Gryphon Hero with six possible spawn points around the Cairan Docks. 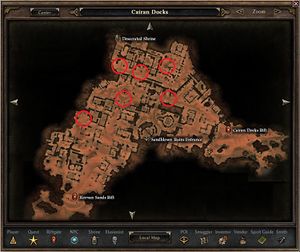