During our research on the Korvan people, we uncovered tales of a massive, bloodthristy beast roaming the desert, consuming all in its path.

These tales speak of the beast as if it were an ancient terror but there may be more truth to them than fiction. Recently, a group of scouts were attacked while exploring the outer reaches of the Korvan Sands.

Only one of three survived and she described an attack much like those of Korvan folklore.

If this beast is real it must be destroyed. Go to the Korvan Sands and hunt down the Korvan Titanovore.

This is a highly dangerous task, which we will gladly compensate with rare scavenged materials.

The Korvan Titanovore is a Boss creature with a single spawn point in the Korvan Sands, south of the Rift gate. 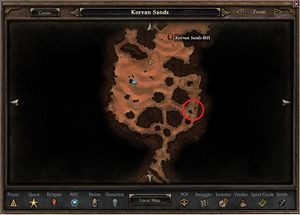