The priesthood of Solael wishes to continue their research in the Tomb of Sethan. We believe there is an unusually strong connection to the spirit realm there.

However, the tomb is protected by a particularly powerful guardian. This animated statue must be removed for our research to continue.

Find the Tomb of Sethan in the Valley of the Chosen and destroy the animated statue called Yaharum.

The destruction of this abomination shall be rewarded with iron bits. 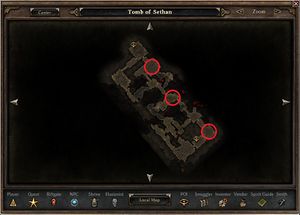 Guardian Yaharum is an Animated Preserver Hero with three possible spawn points in the Tomb of Sethan.