Several seers in the Dreeg camp have reported visions of one particular eldritch wraith.

They believe this powerful minion of Korvaak is attempting to attack their minds from deep within the Eldritch Realm. This cannot continue.

Travel to the Throne of the Three, accessible only through the Tomb of the Eldritch Sun and destroy the wraith called Avronath.

The destruction of this abomination shall be rewarded with scavenged materials.

Avronath is an Eldritch Spirit Hero with 4 possible spawn points in the Astral Fields. 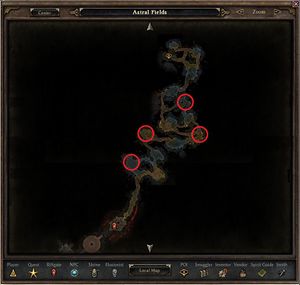