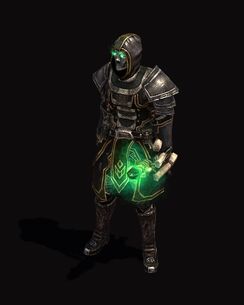 Anasteria (also known as The Outcast) is a Possessed witch in Fort Ikon Prison. She is the focus of The Aetherial Witch quest.

The player can choose to either to ally with her (giving them The Outcast faction quests), or to kill her, transforming her into a unique boss creature (and giving them access to a new dungeon within Fort Ikon Prison)

Not much is known about the enigmatic Anasteria, or why she knows so much about the Aetherials and their plans for humanity. She seemingly arrived out of nowhere, her hands raised high above her head as she approached the Legion forces in the north. She was immediately taken to the Inquisitor, who the Black Legion brass decided would be the most experienced in dealing with witches and sorcery. Before the Grim Dawn, witches would often be tried and burnt on the same day they were captured, their position in society beneath even that of occultists.

Anasteria was brought before Creed bound in chains. She could seldom lift a finger without a Legion Myrmidon reaching for his blade. Creed insisted upon calm. He too was cautious of this mysterious arrival, but he was willing to hear her out before condemning her to the noose. Anasteria spoke at length about all she had learned about the Aetherials through her premonitions and warnings from the bones.

What sparked Creed’s attention though was mention of an impending Aetherial attack upon a Legion camp out in the Asterkarn Valley. Creed motioned for the guards to deliver this information to Commander Lucius immediately. Perhaps Anasteria was lying, but if she was right then Legion lives were at stake. Creed was not willing to take that chance. An eldritch familiar was sent out at once to warn the scouts of the attack. Creed and Anasteria sat in silence, awaiting the result of her warning.

Within the hour, Commander Lucius himself entered the room to inform Creed of Aetherial forces pouring into the Asterkarn Mountains through a pass they had believed was too snowed in for anyone to cross. Thanks to Anasteria’s warning, the scouts were able to retreat in time. Creed and Lucius eyed the witch with curiosity, her mask hiding any indication of her reaction to the news. Creed ordered that Anasteria’s shackles be removed. If they were to continue talking, they would do so on equal terms.

Creed asked to be left alone with the mysterious witch. They talked for hours about the Aetherial plans for assimilating humanity, but when Creed’s questions got too specific, she would shrug and draw a blank. Her knowledge, it seemed, still had its limits. There were secrets about the Aetherials that even this witch did not know, or perhaps refused to share. Nevertheless, Anasteria was willing to help the Legion fight their powerful foe.

Creed emerged from the interrogation chamber with Anasteria in tow. He declared that no harm was to come to the witch under severe penalty. She carried valuable information that could save lives. The Commander scowled at her, not entirely comfortable with having such a pariah within his walls, but he respected Creed’s wishes. Anasteria, with her life secured, presented the Legion command with detailed information on Aetherial movement in the area, as well as where they planned to strike next. None could fathom how she came upon this information, but with her earlier warning proving all too accurate, they were not willing to take any chances.

Anasteria’s information proved to be eerily accurate at first, allowing the Legion to cripple Aetherial forces with unexpected attacks, or to retreat where the situation was hopeless. She had singlehandedly saved countless human lives, though hardly anyone in the Legion was willing to admit it. Over time, her knowledge became more spotty, until eventually the day came when she was wrong. The enemy, it seems, has adjusted their tactics.

With her knowledge spent, many in the Legion started calling for her swift execution, branding her an unnatural witch and a heathen, but Inquisitor Creed insisted that she had earned their trust and deserved to live, despite any predispositions the soldiers may have towards her kind. For now, Creed’s command seems to be respected; but how long will it be before someone in the Legion decides to take justice into their own hands? You arrive at Fort Ikon during a contentious time. What will Anasteria’s fate be? That may well fall upon you.

Anasteria will have two Ironside Hulks to back her at the beginning of the encounter.

Anasteria will become Anasteria, Wrath of the Aether, with increased Health, Health Regen, Spirit and Resistances.