Foolishly and greedily did the arcanists of Cairn delve into the magical veil known as the Aether, never once suspecting that something was looking back.

The Aetherials descended upon Cairn in what is now known as the Grim Dawn, possessing countless humans and butchering the rest. Most despicably of all, they began raising the fallen as mutated undead creatures, mindless foot soldiers for their invasion. Their very presence on Cairn is enough to mutate the wildlife, turning once docile creatures into vicious monstrosities.

But most strange of all is their apparent hatred for Chthonians, as they will battle against the horrors from the Void at every opportunity. 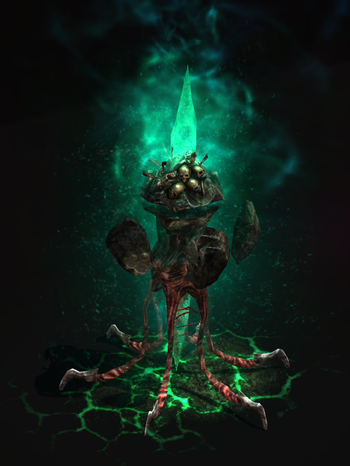 Aetherials are one of two otherworldly Factions present in the Grim Dawn universe. Killing Aetherial and Aether Corruption enemies will increase the players' negative Faction Reputation.

The Aetherial Nemesis is Valdaran, the Storm Scourge.